A beautiful and exuberant performance where classical music and aerial acrobatics meet in symbiosis.

A circus performance takes place high above the audience heads. Playfully acrobats and musicians make the air their stage. Weightlessly they float to the tune of classical music.

Sinfonia Volante is a beautiful and exuberant performance where classical music and aerial acrobatics meet in symbiosis. The performance takes place on a 12 meter high metal rig which the acrobats tackle with impressive skill. Even the musicians hang in the rigging and play. Here, music and circus interact in an alternately wild, alternately devout performance.

– Sometimes you get overwhelmed when you look at an ocean or a mountain, says Magali Bancel, who is the director of the show. The world is so big and you yourself are so small! In all the monumental, you can still feel a sense of belonging. That’s what we want the audience to experience! Something huge is presented to them and they get to feel that they are part of something bigger.

In concert 12 meters up in the air

The performance premiered in September 2022 and is created in collaboration between the circus company Cirk-L and musicians from the Norrköping Symphony Orchestra. The musical influences are noticeable not least in the show’s title. Sinfonia Volante is Italian and means flying symphony and here music and acrobatics have been created together.
The newly written music has been created based on the acrobatics, explains Magali. They have started from the pendulum that controls the movements of the acrobats and composed accordingly.

– It feels very natural to experiment with circus and music. Music is often played in the background of what is presented on stage. Here, instead, we want the musicians to be physically present, for the music to be physical.

More about the event

The performance is played at Hangaren in Alby (Albyvägen 38) and has a recommended age from 7 years. The performace ais 45 minutes.
The short film Foundry of Dreams by Aino Ihanainen & Alexander Weibel Weibel is shown in the foyer before and after the performance. The film is produced by JONK! Performing arts.
Ticket prices are SEK 200 for regular and SEK 150 reduced price. 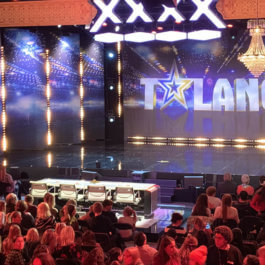