From Satan to Wounded Animals
Skip to content
Subtopia 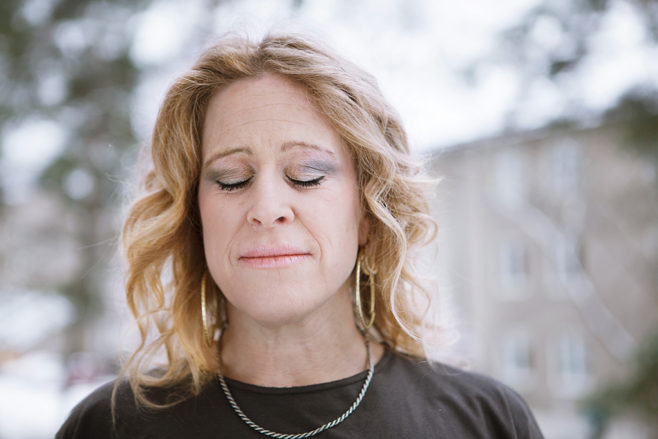 From Satan to Wounded Animals

After 20 years on stage, clown and comedian Angela Wand has taken on her greatest challenge to date a solo show. In Wounded Animals, she reflects over her own human flaws.
Text Kristin Kling, photo Saga Berlin

At college, back in the US, Angela studied all sorts of things except for theatre. Adults always told her that theatre was no way to make a living, but the truth simply was that Angela never wanted to do anything else than be on stage.

– I understood early on that I had a knack for making people laugh. This gift gave me something – an adrenaline rush, friends, attention, and total happiness. I wish I could say I became a performer because I wanted to change the world or give something back to the community, but unfortunately, this is something much more superficial than that. I wanted to be seen.

By now, Angela has performed on stages all over the world, as a clown and a comedienne, for more than 20 years. Over the years, she’s collaborated with Clowns without Borders, Cirkus Cirkör, Lena Philipsson, and Joe Labero. In February of 2016, she achieved her next career milestone a solo show.

– I went through a long period of feeling that I was going nowhere as
a performer. I was revisiting all my old projects, and reusing the same old tricks and patterns. It started to wear on me. I realised that the time had come to do what I’d always been the most afraid of doing a show with only myself on the stage.

The show is called Wounded Animals, and it’s about Angela’s human flaws. The current political climate, and the growing fear in Swedish society inspi- red the show’s contents and title.

– As the show began to take shape, I began to grow concerned that human solidarity was going extinct, because what I saw in the streets, in people’s homes, and on the Internet was a society consumed by fear. I’d seen that fear in my own country, but when I moved to Sweden from California in 1997, there seemed to be less of it here. Sweden taught me about the collective, and how investing in the community means investing in yourself, says Angela, who switches back and forth between English and Swedish. She continues:

– Unfortunately, fear of losing ‘what is mine’ seems to have replaced the ideal of community. Fear causes aggression, and there is nothing more dangerous in nature than a wounded animal. A wounded animal fights to death. In today’s society, I believe that we’re all wounded animals. But maybe, if we show our wounds, and admit to our weaknesses, we can replace this fear with understanding, and make ourselves a little less dangerous to ourselves and to each other. My hope for Wounded Animals is simple. Be nicer to each other. Everybody is complicated, because we’re all shaped by our experiences. Nobody will have the same answer to a certain question as anybody else. 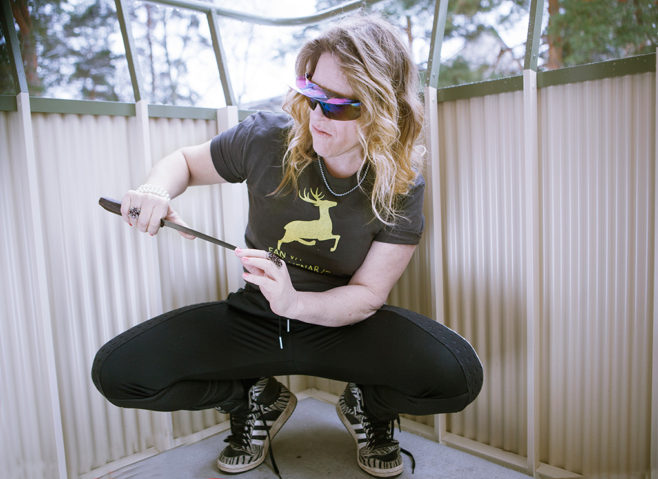 The theme of social issues returned during the autumn, in what Angela refers to as a monstrous project. In Satans demokrati, which was directed by Jimmy Meurling and Py Huss-Wallin, a free interpretation of Bulgakov’s novel the Master and Margarita is given in an office block in Sickla, in which artists have transformed 150 office rooms into art installations and theatre stages. The guests wander freely, and explore the scenes and the actors as they go. Angela’s role is Woland; Satan.

– Woland returns to Earth to cause chaos in society; a society which is living in a state of hyp-notic denial. With consumption serving as both a distraction and a means of validation, our whole society seems to simply accept that you nothing can be changed. Woland turns society upside down. The way I see it, Woland is people’s instincts, subconscious, common sense, and conscience. I hope that people will be inspired and amazed, and have an easy time laughing, but feel their laughter ring false when the truth sinks in.

Another person who performs in Satans demokrati is director and actor Stephen Rappaport. Angela and Stephen have similar backgrounds, being Americans in the Swedish stage performing scene, and this served them well in their work on Wounded Animals.

– We created the show in five weeks. He listened to my stories, pulled various things out of me, cut off some of the excess, and after three days, we had about three hours of material. That’s Stephen’s gift. His flow is insane. It was such a relief to share my status as an outsider, but also as somebody who loves Swedish culture, with somebody who understands. The most surprising thing was how organically it all grew into being, how much mutual respect we felt, and how little pressure we felt over the end results.

The entire creation of Wounded Animals took place at Subtopia, which Angela calls her tree.

– Subtopia is the tree and I’m one of its small branches. I rely on the tree for shade, nourishment, strength, and support, for variety, love, and the feeling that I’m a part of something greater than myself. My challenges as an artist would have been much more frustrating if I hadn’t had Subtopia by my side these last ten years. They encourage radical independence while offering total inclusion. Just think if all the world were like that. Wow, just imagine that.