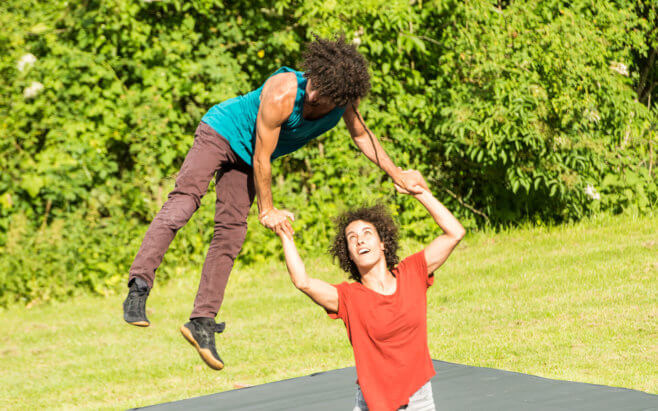 At the end of August, two acrobats visit Alby and Fittja with free performances outdoors. French company Amir and Hemdas acrobatics mix dance, parkour, and capoeira in a performance based on their own relationship.

Amir and Hemda’s performance turns the usual relationship of couple acrobatics on its head when the woman becomes the base, the one who lifts, and the man is the one flying through the air. The duo continuously challenge each other to outdo themselves, and the audience is served with many jaw-dropping moments with a style that blends dance with parkour and capoeira.

After the performances, the school Cirkus Normal will invite you to try some of the circus arts.

Tavernan at Mångkulturellt Centrum is open on Friday, August 30, and sells coffee, sweets and food.

Amir and Hemda have been selected by the European project Circus Next, which supports young talents and circus companies with promising careers.

The arrangement is accomplished with the support of Botkyrkabyggen