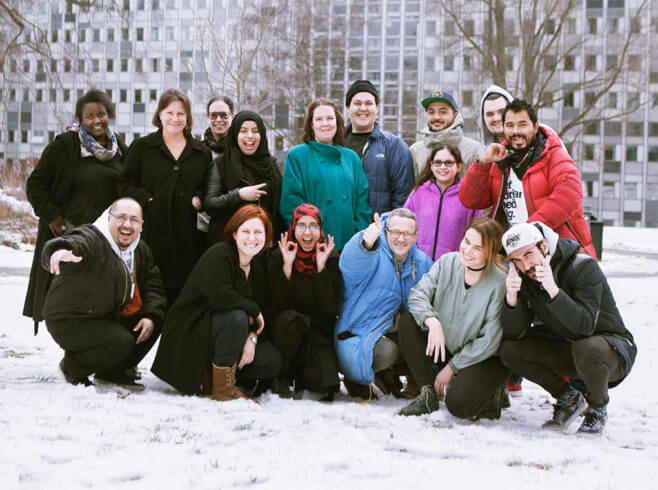 Who is visible in media? Sveriges Röster is aiming to create space for new perspectives. The project will be completed in the autumn of 2018 and the first step has been to establish a network.

Who is visible in media? Sveriges Röster is aiming to create space for new perspectives. The project will be completed in the autumn of 2018 and the first step has been to establish a network.

– There are close to 50 places in Sweden in which some of the methods that we use are implemented. If we could connect with each other, we’d become a force strong enough to influence public service, says Samuel Sjöblom, who manages the Sveriges Röster project in collaboration with Luis Lineo.

Luis describes it as the emergence of a new popular movement.

– The temperance movement, the worker’s movement, and the Christian free church movement played important roles for democracy. This is a new popular movement, and in order for us to survive and grow strong, we’ll need to come together and show people that our movement harnesses the power of storytelling to promote participation in democracy.

An important collaboration partner for this project is Sveriges Television.

– The core objective of Fanzingo is to publicise new points of view, and allow more people to be heard and influence public discourse. Public service has had the same goal, but they haven’t always had the means. It’s supposed to be a democratic space, but its legitimacy will suffer if not everybody feels that they’re represented. Young people, and other groups, such as rural communities, often feel that their point of view isn’t heard. This is where we, and Sveriges Röster, can serve as facilitators, Luis explains.

Sveriges Röster will open at least six media labs around the country, to serve as both talent scouting agencies and media workshops, where youths aged 16–30 and SVT can organise fruitful exchanges. For this to work, the meetings will need to be characterised by humility. Luis explains:

– We’ll be entering into this project with a norm critical outlook, but the work we’ll be doing is norm creative. Norm critique is a way of putting the spotlight on power. Which voices are we always hearing, who gets to tell their stories, and why is this the case? Norm creativity though, is all about give and take. On the one hand, the people in power should feel that giving up power is a meaningful and acceptable thing to do. But on the other hand, those who feel that they have no power need to be open to and curious about the power they actually do have. They have to be thinking “I have something they actually need”.

About Fanzingo and Sveriges röster (Voices of Sweden)

Fanzingo has spent ten years promoting the participation and influence of youth in the media. Their collective knowledge served as the foundation for the Sveriges Röster project, which aims at making room for new voices and talents in the media. The project will run until the autumn of 2018. The idea is for the six media labs and the network to live on after the project ends. The project is financed by the innovation agency Vinnova.

Down load a pdf of